WEST VINCENT — The final piece of a puzzle that is a “conservation community” in northern Chester County fell into place recently with the sale and preservation of a lot at the Bryn Coed Preserve — once the largest remaining unprotected swath of land in the Philadelphia area — by a private buyer.

In one of the most ambitious conservation projects in recent history, the entirety of the land is now protected from development forever, according to a press release from Natural Lands, the regional land conservation organization that put together the effort to save the former farm from development. 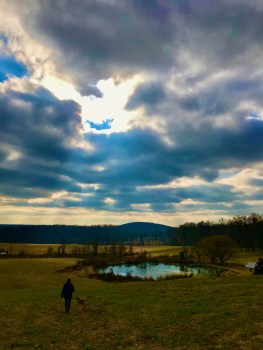 Part of the plan called for the sale of slightly over 900 of the property’s 1,505 acres to private buyers who would agree to strictly limit the number of homes or buildings that could be constructed on the lots. The sale of those lots would then fund the organization’s purchase of the land for conservation.

“I’m thrilled that we’ve reached this milestone — the final lot sale — which marks the successful conclusion to this ambitious land protection project,” said Natural Lands President Oliver Bass. The organization had given itself eight years to sell all of the lots, but accomplished that goal in four, he said.

“Saving Bryn Coed was the chance of a lifetime, but it required a tremendous amount of work—and a tireless community of supporters,” he said in the release. “We’re forever grateful to our generous funders, forward-thinking elected officials, and talented land protection team. We went out on a limb on this one, and it was so worth it.”

It also amounted to the development of what those in Natural Lands began referring to as a “conservation community” along the area surrounding the preserve.

“It’s a term we coined in an attempt to convey to the folks who got interested in the plan that they would be connected to something more than just a place to live,” Bass said in an interview Friday about the final sale. “Those involved become part of a larger whole. We’ve joked over the years that what Bryn Coed is, is a golf club without a golf course, with a nature preserve in place of a golf course.”

Bass estimated that there were 39 lots divided from the acreage, one of the largest of which is a 72-acre parcel that was purchased by West Vincent for use as a township park. The others ranged in size from 25 to 35 acres, and one very small two-acre lot.

Those 28 buyers who purchased the lots included landowners already established in the area who wanted to preserve land adjacent to theirs as well as new buyers wanting to build on land in the Chester Springs region. Those homes are in various stages of development, said Bass. All buyers, however, had to agree to preserve the land and not subdivide it further; only two structures are allowed on the property — a home, perhaps, and an accessory building such as a barn with a living space attached.

Bryn Coed Preserve is open, free of charge, to all. Visitors flock to the preserve, located along St. Matthews Road, in all seasons, with Bass saying that as many as 60,000 visits had been clocked in 2021.

In 2016, Natural Lands — the region’s oldest and largest land conservation nonprofit — signed an agreement with the Dietrich family to purchase the entire 1,505 acres for preservation.

In the 1970s, the Dietrich brothers assembled the vast acreage known as Bryn Coed Farms one parcel at a time. One of these tracts was the former homestead of U.S. Supreme Court Justice Owen J. Roberts, who named his farm “Bryn Coed,” which means “wooded hill” in Welsh.

Many worried over the fate of the pristine farmland and forests — located just 30 miles northwest of Philadelphia — as development pressures increased in the region. Concerns mounted when, in 2003, the Dietrich brothers decided to divest themselves of Bryn Coed Farms. Under township zoning, nearly 700 homes could have been constructed there.

Much of the property is actively farmed or in pasture. Nearly 500 acres of mature woodlands grace the property, home to myriad songbirds and other wildlife.

In addition, there are several trees located at Bryn Coed that might have been bulldozed to make way for hundreds of homes had the land not been protected. The organization noted several in its latest release, some of which are listed on the Big Trees of Pennsylvania Register, which is managed by the Pennsylvania Forestry Association.

The property contains the headwaters of Pickering Creek and is a high priority for source water protection. Bryn Coed Preserve alone constitutes 17 percent of the remaining unprotected high-priority land in the Pickering Creek watershed.