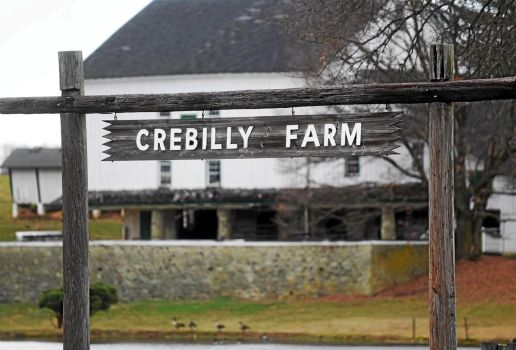 Crebilly Farm in Westtown. (Pete Bannan – MediaNews Group)
WESTTOWN — With a Nov. 8 referendum, township voters will decide whether to up their taxes, while likely voting on whether to save iconic viewshed Crebilly Farm from development.

By voting “Yes,” voters will tell the township officially that they prefer preserving the property for perpetuity.

On April 4, the township agreed to purchase 208 acres of Crebilly Farm for $100,000 per acre, or $20.8 million. Most of the rest of the 322 acres will be subdivided into four individual lots, each with a single home.

The township will need to secure approximately 75 percent of the purchase price from county, state, and federal grant programs by March 31, 2023. The rest would be paid for by taxpayers.

The township is proposing a blended tax increase, with 50 percent of the cost funded by Earned Income Tax and 50 percent by real estate taxes.

If voters agree, the EIT will increase from 1 percent to 1.08 percent and the real estate tax would go from 3.5 mills to 3.92 mills. A mill is a tax levy of one-tenth of one percent of assessed property value.

According to a draft release issued by the township, the taxes would depend equally on a household’s income and the assessed value of the property.

According to the release, if a household income is $100,000, an extra $80 annually would be collected through the EIT. Exceptions such as retirement funds, social security and others who are not generating earned income are not affected by the proposed EIT raise.

With the median assessed value of Westtown homes at $250,000, average homeowners would pay an extra $105 per year.

“By spreading the tax increase across both taxes, the township ensures that residents on fixed incomes are not overburdened by new taxes, while also not putting the tax burden solely on working residents,” reads the township draft.

Dick Pomerantz is a township supervisor and chairman of the WEGO Police Commission. He spoke at the D-K Diner as a private citizen concerning matters of the referendum, on Monday.

Preservation of Crebilly is not a done deal.

“Perhaps it’s not surprising that the public believes that Crebilly is already saved,” Pomerantz said. “We have to inform and educate the public what the facts are in a short time period.”

“Now that the Toll initiative has fallen through, I’m pleased that we have a willing landowner and the Robinson Family is now considering preserving most of the land.”

Pomerantz noted that runoff along the 926 corridors in other neighboring townships would be lessened with preservation. Economically, new homes add to the cost for the township to do business.

Passive recreation will attract families to the iconic viewshed.

“Visualize in not too many years family picnics, a family throwing around a ball, taking in a magnificent vista and saving part of the Brandywine Battlefield,” Pomerantz said.

Mike DiDomenico is a former township supervisor who voted twice during unanimous board tallies to deny builder Toll Brothers.

Still, DiDomenico is opposed to increasing taxes through the voter referendum.

“I eventually turned (Toll Brothers) down because they wouldn’t budge and meet our conditional uses,” DiDomenico said in a phone interview.

Toll Brothers had proposed the construction of 319 homes at the last large parcel of land along the Route 202 Corridor between King of Prussia and Wilmington.

The former supervisor said that the five-year contract between the landowning Robinson Family and Toll ended because the “Robinsons didn’t see it going anywhere.”

He said that the cost to build restrooms, black top walkways, and for employees to cut grass and to maintain the property, will go on “forever.”

The township has finalized no plans at all yet, according to Pomerantz.

“Any assumptions as to what is going to take place post-referendum is just that assumption.

DiDomenico would also like to see crops continue to be grown at 208 acres of the now-working farm, although that would be forbidden due to the specific grants applied for.

The former supervisor is not a fan of the view.

“All this for what — to look at barren land — for what, just to look at?” DiDomenico asked.

He also said that the portion of the land probably crossed by Revolutionary War troops would most likely be developed as part of the four parcels of about 25 acres each, and sold to prospective homeowners.

Mindy Rhodes, a West Bradford Township resident who grew up in Westtown, has helped spearhead the drive to save Crebilly, along with hundreds of residents who attended marathon public meetings.

“The developers are already lined up to pounce next chance they get,” Rhodes wrote, as part of regular email updates. “If Crebilly Farm is developed, your property values will decrease, you will pay higher taxes and you will live with more traffic, more congestion and more pollution.

“It will be ‘game over’ and we will all pay a far more dear price than the opportunity currently on the table.”

Kirsten Werner, senior director of communications for Natural Lands, which is tasked with securing grant funding, said that the land conservator has not yet received any notification regarding grants.

“With climate change bringing more heat extremes and storms/flooding, preserved open space is one of the best (and most economical) ways to mitigate these effects.”

Many residents at the public meetings talked about the added traffic a new development might create.

“Traffic at the 926/202 intersection is notoriously bad as it is,” Werner wrote. “If Crebilly is developed into 300+ homes, it will be a nightmare.”

“And with an informed public, the successful referendum, and Natural Lands being able to raise the necessary funds, will result in the preservation of Crebilly, the iconic centerpiece of the township.”

The public is invited to a discussion regarding the referendum that will take place on Sept. 12, at 7 p.m., at Bayard Rustin High School.

Bill Rettew | Reporter
Bill Rettew is a 20 year veteran reporter who enjoys being the eyes and ears of the community. As a staff writer for the Daily Local News he covers events, politics and the people of the Greater West Chester Area. The Chester County native’s favorite part of his beat is writing the weekly Sunday column, “Small Talk.”
wrettew@dailylocal.com