WESTTOWN — Westtown Supervisors Monday night voted unanimously to enter into an agreement of sale that would open a path for permanent protection of the 306-acre Crebilly Farm, a landscape icon in the area that some residents had feared might be taken over by developers.

The township hopes to purchase 208 acres, with the remainder given to land conservation protections with the renowned Natural Lands organization. Although saving the land is not a done deal, many who fought development for years in township meetings are hopeful that the tract will be preserved, while most of the 50 residents, staff and supervisors in the meeting room expressed cautious optimism that the site, which likely saw action at the Battle of Brandywine in the Revolutionary War, might be permanently saved from bulldozers. 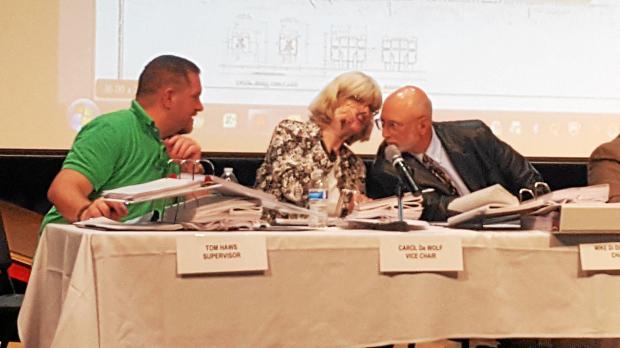 Township Solicitor Patrick McKenna of the West Chester firm of Gawthrop Greenwood compared the deal to a basketball game. “The game has not begun, you’re at the tip-off,” he said. “We’re just now at the beginning of the game.”

Along with the assistance of Natural Lands, and as part of a process that is expected to last from 18 months to two years, township residents will need to go to the polls in November and vote in favor of a referendum question, while agreeing to a tax increase to fund the purchase, supervisors explained. In addition, federal, state, and county grants will need to be secured to create accessible open space and privately owned preserved land.

A second agreement between the Robinson family, owners of the property along Route 926 and New Street, and Natural Lands will allow the non-profit land conservancy to purchase up to four 25-acre conservation easements on lots that will remain on the market. The Robinsons would then sell those easement lots to buyers who must abide by the conservation agreements, according to the announcement Monday.

Natural Lands and the township must secure approximately $25.5 million in grant funds to purchase the easements and to fund what will be a publicly accessible portion of the farm, among the most revered places in the county. This funding is for both the public portion of the land and the cost of the easements.

Supervisors Chairman Scott Yaw, among those who has fought to preserve the farm, expressed satisfaction with the agreement. “By acquiring 208 acres of Crebilly Farm, Westtown Township will ensure that this pristine corner of the township remains unspoiled for generations to come,” Yaw said.

Hundreds of residents attended marathon meetings over several months to oppose builder Toll Brothers’ plans to develop 319 homes on the farm, with hearings starting in December 2016. Twice supervisors voted to deny the variance that Toll Brothers applied for, and a court decision ended Toll’s bid to build on the farm, the last large chunk of open space on the Route 202 corridor, among the most developed and heavily populated in Chester County.

So what will the township’s 208-acre open space become? While no firm plans have yet been made, passive recreation such as hiking, walking and picnicking were suggested, she said.

The referendum question will contain language based on state statute and the process will be overseen by Voter Services. The board will need to adopt an ordinance. Yaw said the process will be transparent. “It’s a lot easier to get people to say ‘No’ than to say ‘Yes,’” said Supervisor Richard Pomerantz. “There will be people for this and people against it.”

Resident Vince Moro said from the audience that voter turnout is key. “As an organization of ‘the people’ from Westtown Township and neighboring communities we are grateful Crebilly Farm has the chance it deserves to be preserved for generations to come,” he said. “We all enjoy the open space we have here and all it has to offer to us individually and as a region.

“From the beginning, we were told that this was a done deal and it was a waste of time to try to stop the development of Crebilly Farm, especially with an organization as big as Toll Brothers,” Elizabeth Moro said. “Yet the neighbors came together and worked for a better outcome. “Here is our chance to preserve it in perpetuity. Let’s keep working together to get this deal done.”

Mindy Rhodes, who keeps the community updated about the Crebilly issue through regular emails, expressed gratification that all private donations will go through non-profit Natural Lands. “I am so incredibly grateful to the Robinson family for giving all of us the opportunity to take these first steps in a new chapter,” she said. “In addition, the unwavering support of the community and Westtown Township has gotten us to where we are today, a place a few of us only dreamed of years ago.”

Oliver Bass, president of Natural Lands, said in a statement that he is hopeful that the non-profit will be able to secure funding from a variety of federal, state, county and municipal sources over the next couple of years.

“However it is likely that there will be a gap between available funds and the amount we need to raise,” Bass said, in a release. “While a campaign is not yet underway, we anticipate that there will be an important role for the community — which has been so outspoken in support of Crebilly’s preservation — to play in making up that gap.

Bass encourages the public to sign up for updates on the project at www.natlands.org/crebillyfarm.

Ken Hemphill, an open space advocate who co-founded Save the Valley and Save Marple Greenspace in Concord and Marple Townships, applauded the move.

“This current board of supervisors has the opportunity for a once in a lifetime achievement by promoting an open space bond referendum to township residents,” Hemphill said. “Dozens of other townships in the area have successfully convinced their constituents to vote in favor of similar referenda, so my hope is that Westtown’s supers will do likewise.

“Open space can’t save itself.”